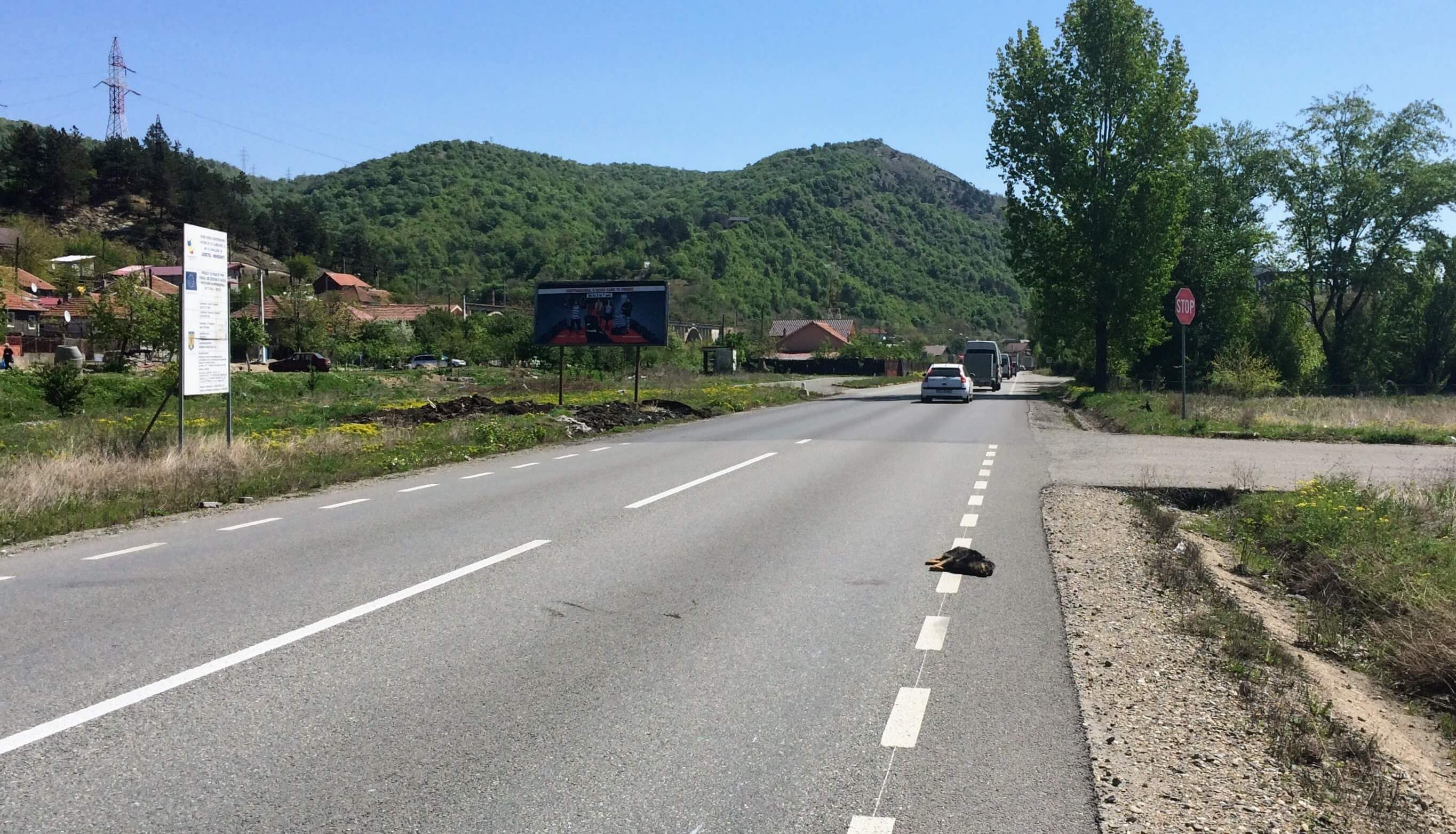 “To be a truly happy person, one must contemplate death five times a day.”

Although i wasn’t aware of this practice in any of my previous cycle tours, there are at least two things i can confidently say about them:

We’ve all seen roadkill, and sure at least some of you will agree that their various shapes, sizes states of putrefaction are much better appreciated from a bicycle than from a car — dogs, deer, squirrels, badgers, mice, birds, toads, snakes, snails, or whatever that used to be during its brief, confused life come by the daily dozens on a cycle tour — their individual lives rendered relatively insignificant by the context underlying their impending but still unexpected death

That’s my own fate!

I very glad on a cycle tour. 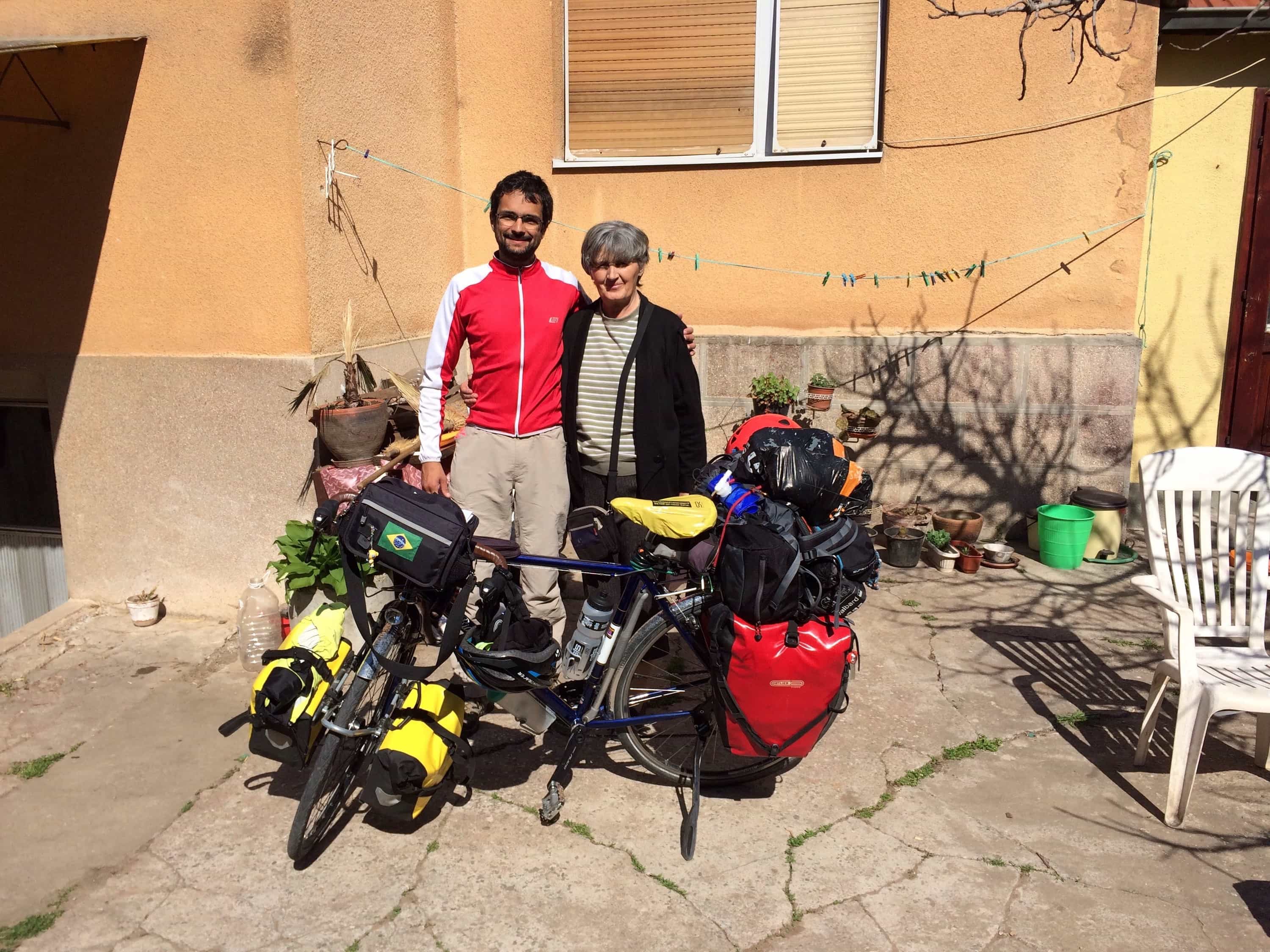 UPDATED February 23rd, 2019 — after 154 days on the road, this project “concluded” with my temporary relocation to Lviv, Ukraine. Follow the links to read the chronicles of my experience in Serbia, Romania, Ukraine, Transnistria, Moldova, back in Ukraine, Belarus, Lithuania, Russia (Kaliningrad), Poland, Sweden, Norway, back in Sweden, Denmark, one last time through Sweden, back in Poland, then finally home in Ukraine — more to come as process it — sign up for my weekly newsletter to stay in the loop!

On April 2nd, 2017, reassembled my cycle touring rig and left behind the lovely city and people of Niš, Serbia. My idea is to eventually reach Nordkapp, Norway via Eastern Europe and Russia.

About 25 days and 916 km later, on April 27th, find myself in Bucharest, Romania. This has been my longest break on a tour so far, which taken to apply for a visa to Moldova, do some maintenance on myself and the rig, catch up with my writing, and along the way make some friends before throwing myself back into open water tomorrow.

So far very happy chose this route. I’m also happy been pursuing it at such leisurely pace — although this expedition has indeed been loosely guided by this hypothetical destination all the way to the far north, it has in reality been fueled by my encounters along the way.

I expect that to remain the case for the five or six months have left on the road.

coming articles, will further develop on those encounters, and how they have shattered my assumptions and prejudices — about the places visited in particular, as well as how people behave and the world works in general.

There are also a few other dimensions to this project, such as the Geocaching trackable i’m bringing with me as far north as i can, the trees i’ve been climbing along my way, my efforts to pick up some Romanian and Russian on the road, and how i’ve personally dealt with some of the challenges and practicalities of a long-term cycle tour. These will also be discussed in future articles.

For the remainder of this one, will just briefly describe the process leading to this route to North Cape via Eastern Europe and Russia.

On November 24th, 2016, arrived in Istanbul by bicycle, after 62 fantastic days on the road all the way from Copenhagen, Denmark. That had been my greatest adventure so far, in a series of increasingly amazing adventures throughout the year.

It was clear what to do next — up the ante! So, moved to Niš, Serbia, where would brave the Winter tying up loose ends from my previous life in academia, setting up this website, and planning the next epic cycle tour.

I’d wanted to ride to North Cape ever since my very first cycle tour, from Copenhagen to Oslo, back in Summer 2015.

But once had reached Istanbul, the obvious follow-up was the Silk Road — in almost every regard, it would have made perfect sense to bring my bicycle back to Istanbul, spend a few more days hanging out with my Turkish friends living in the city, then resume my ride further East through Turkey, Iran, the Stans, China, hopefully my wet cycle touring dream of Mongolia, and neatly set myself up for what might eventually develop into a World tour. That prospect had a cost that was not willing to pay at the moment though — its logistical challenges (basically, visa requirements and weather patterns) would put me on a tight schedule, and possibly cost me more money than might have had to successfully fund the project.

According to my travel philosophy, actually did Copenhagen–Istanbul in quite a rush already — wanted to avoid the snow, and so had to be always on the move, declining several invitations to stay and hang out longer with my hosts along my way.

No. I wanted my next tour to be as unconstrained in that regard as it could possibly be — wanted the freedom to stop for five nights at the same farm less than one week into the tour, as did at Dragan and Vera’s while lending a hand to them and their volunteers,

or to stay for ten days in the same city, making friends and being silly, as did in Bucharest.

In what other direction could ride starting from Istanbul? — or perhaps even Niš already?

From Cape Agulhas to North Cape

The next most obvious route would have been finding my way to Egypt, possibly on a boat across the Mediterranean, then riding down along the East Coast of Africa to Cape Agulhas, the southernmost point in the continent — something along the lines of what my friend Zelda did. I wouldn’t have to worry as much about the weather, and the few visas needed could probably be obtained more easily, would be more flexible than the visas for Central Asia, and also cost me less.

Scared (by my prejudices) to pursue that route solo, came up with a really neat “excuse” not to do it — even if eventually do feel ready to cross Africa alone on my bicycle, wouldn’t it be great to do that starting from Nordkapp, the northernmost point in Europe?

How the hell would get all the way up there though? I would not have enough time to reach North Cape and come back down before my Schengen visa expired, and just talked about how really didn’t want to rush on this tour!

it be possible to reach North Cape from outside Schengen?

So, Belarus and Brazil have just signed a mutual visa-free travel agreement for tourists!

That’s when remembered Russia and Norway have a border crossing wanted to cross since first noticed it several years ago, and that Brazilian citizens don’t need a visa to visit Russia as a tourist — neither do they need one for Serbia, Romania or Bulgaria, Ukraine and, as of November last year, Belarus also!

Habemus cycle tour. Apparently, constraints can sometimes be blessings — privilege is not spanned along a single dimension like much of what we read and hear about it these days seems to imply.

I’m not deluded — of course crossing those borders when get to them might still be a challenge, or perhaps even wind up not happening at all. But these are all bridges can worry about crossing when get to them — my point is, at least be able to plan my tour without much preemptive bureaucracy.

Indeed, with the experience and gear had from the Copenhagen–Istanbul tour, there was very little left to be done to prepare for this one. I just had to come up with rough estimates of the distances, to make sure could reach North Cape some time in the middle of Summer without having to rush, do a quick inventory check to figure out what could remove from my kit to make room for my tree-climbing gear and, finally, the most important part of preparation for any cycle tour — to leave!

Along for the ride?

If you find value in what share in reaction to my experience on the road and would like to support me in this endeavor, there are a variety of ways you can do it.

The first and most obvious way to help me is to share some of my writing with your network, wherever you hang out with them. This will help me organically expand my reach.

You are personally invited to sign up for my weekly newsletter, where you’ll get manageable bits of long-term travel inspiration and advice. Since not on social media, this is the best way to stay in touch and get updates on what’s new in the Not Mad Yet Universe. You may always reach me by simply replying to any of my emails — read and respond to all of them!

If you find yourself in a position to contribute financially, you’re also invited to visit my membership tab. There you’ll learn more about how fund this project and the perks of becoming an active member.

Thank you very much in advance for your support and interest, and see you on the road!!

Read the next article in the North Cape Hypothesis series: But Why Serbia!?