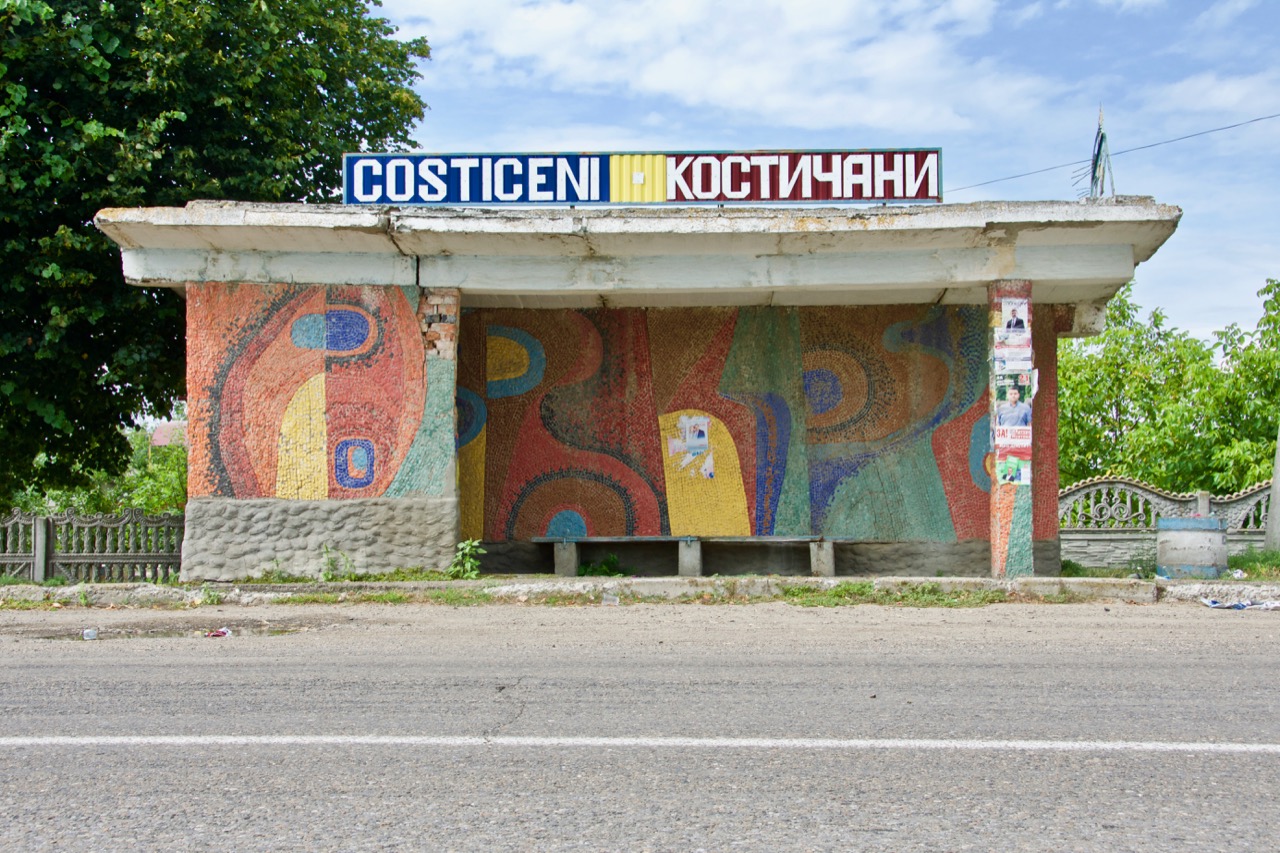 After leaving the city of Chernivtsi about a week ago, we noticed that some bus stops in the villages were decorated with colorful mosaics. This prompted me to document bus stops along our way, and i stopped to photograph at least the ones on top of which the name of the village was shown.

I hope you’ll enjoy this collection and the notes/thoughts accompanying them. Click on the photos to see them enlarged, and with their respective descriptions — i wrote them linearly, and this post will make more sense if you read all the captions in order before moving on to the next paragraph 🙂

Locals old enough to remember told us that they were made for the 1980 Summer Olympics, held in Moscow (then in the Soviet Union) — the road between Chernivtsi and Mamaliha (along the Ukrainian-Romanian-Moldovan border) was part of the Olympic torch relay route from Athens to Moscow.

Newer bus stops don’t have the mosaics, but some of them are still decorated after the bule-yellow-red stripes of the Romanian/Moldovan national flags — all of them show sparing permutations of job postings, graffiti, and political campaign posters (often also in Romanian/Moldavian) for the upcoming Ukrainian parliamentary elections.

Outside the Olympic torch path and away from the historical region of Bucovina, common features of the bus stops seemed related to the raion in which they’re located. In the Khotyn Raion, they have red caption banners.

In the Sokyriany Raion, the banners are blue — and the furthest you are from the historical region of Bucovina, the more common it was to see them painted with the blue-yellow stripes of the Ukrainian national flag.

I stopped documenting them upon arriving in Novodnistrovs’k, on the border between the Chernivtsi and Vinnytsia Regions.

UPDATED on August 21st, 2019: After i published this, a reader drew my attention to the work of photographer Christopher Herwig, who traveled tens of thousands of kilometers across the former Soviet territory documenting the fascinating peculiarities of some bus stops built during that period.

Note: I used this Wikipedia article for the Romanian/Moldovan spellings whenever they could not be locally ascertained.

This was an interesting exercise in a couple different ways.

It was a tremendous exercise in photography. After playing with a few different angles, i decided to keep it simple, and just take centralized shots from across the road — and i still managed to screw some of it up! I thought a smaller aperture with longer exposure times would capture more of the shaded parts, but this often resulted in blurred or noisy images, despite the overwhelming amount of light. Note to self: there’s no point in being lazy on a cycle tour — park the bike, take out the tripod (wherever it is and has to go back to), and savor the process! Note to the rest of you: if you have any experience with photography and any suggestions on how i could make photos like these look and feel better, i’ll be glad to read your feedback <3

I could have surely dug a lot deeper into this, but i was already satisfied (and occasionally overwhelmed) by how much more attention i paid to something i’d have otherwise mostly ignored. If i hadn’t pledged to photograph every single bus stop showing the name of the village where they’re located, i would have skipped many, if not all of them after the first one. It was almost never a good moment to stop for photos — one afternoon we were in a rush to escape from dark clouds approaching us from behind, another afternoon i was in a bad mood after a huge (and pointless) fight with Nastia, yet another afternoon we were anxious to find a roadside pension where we could spend a night or two free of mosquitoes or social obligations, just to have some rest and catch up with ourselves — simply parking the bicycle, getting the camera out, shooting the same photos, from the same angles, then putting the camera back is enough of a hassle.

It’s beneficial to have a practice to be committed to and build upon.

Having said that, i’m not convinced i can remain deeply interested in bus stops for the next three months. So, i decided to look for something different in each administrative region of Ukraine we will visit throughout the Summer — a meta-practice, if you will — what i did with bus stops in the Chernivtsi Region will ideally develop into a series of photo albums capturing, for each region we visit, something that drew my attention there, and the thorough documentation of which seems manageable in the context of my cycle tour.

We’re about to cross the Dnister River into Vinnytsia now — looking forward to finding out what that’s going to be, and then sharing it with you!

I hope that these will be easier for me to put together and for you to digest — but not so cheap that you wouldn’t spend more than a fraction of a second scrolling over it 😉 I also hope it will help keep the newsletter rolling without taking much away from my present experience, and while i look for the space to work on more challenging content.

___
Featured photo: Nastia conquering yet another sizeable hill on the foot of the Carpathians (Ukraine, Summer ’19)